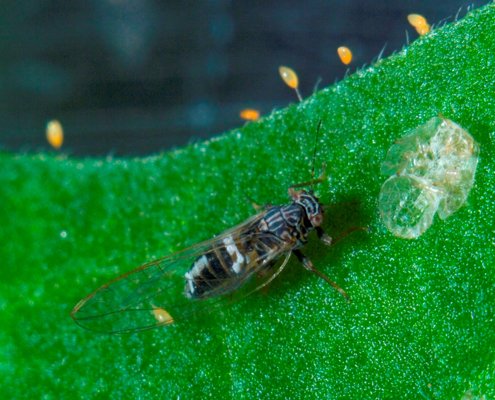 Control of potato psyllid (also called tomato potato psyllid or TPP) when it arrived in New Zealand was achieved by using an extremely heavy insecticide-based approach. If Australian growers were forced to adopt the same approach, then the IPM strategy that had been developed and used for many years in Australian potato production would be rendered useless. So IPM Technologies led a research project to develop an IPM compatible control strategy for TPP in New Zealand, to prepare for the arrival of the pest in Australia.

Paul Horne and Jessica Page from IPM Technologies worked with entomologists from The New Zealand Institute for Plant and Food Research, potato growers, advisors and processors (McCain) to develop and trial an IPM strategy to deal with TPP and all other pests in potato crops. Initial laboratory trials were followed by field trials in commercial crops, in order to evaluate the draft strategy. A successful IPM strategy was developed and the results were communicated to industry through field days at harvest.